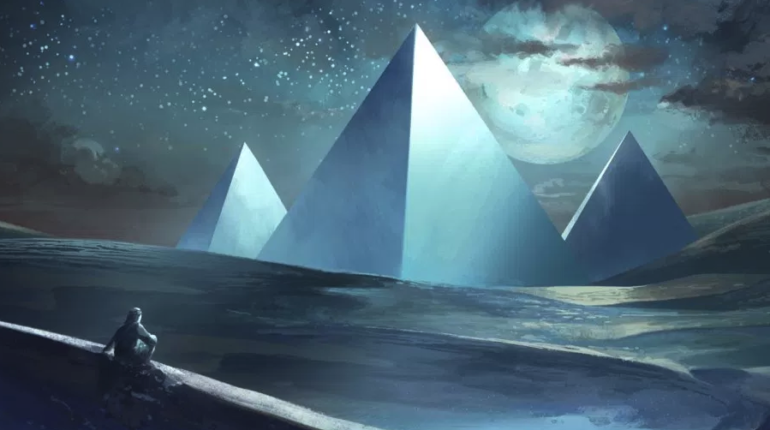 Kill Six Billion Demons is possibly the most exciting webcomic on the internet right now. Famous for its meticulously detailed 4k full-page spreads of interdimensional cityscapes, heavenly vaults, and hellish vistas, Kill Six Billion Demons is the brainchild of a self-titled “comics goblin by the name Abaddon,” also known as Tom Parkinson-Morgan. The comic follows the journey of an everyday college girl named Allison, who, due to a strange misinterpretation of prophecy, is ripped from our universe and dropped, wide-eyed and naïve, into the spiritual nexus of over 777, 777 alternate universes. 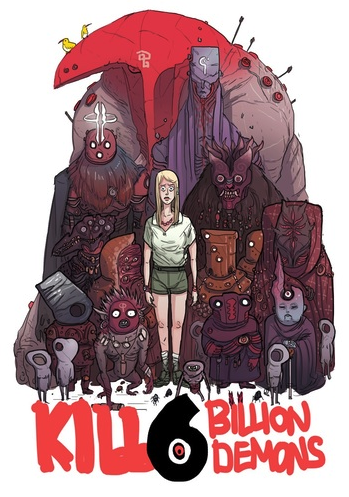 Abaddon’s designs are nothing short of incredible, with the denizens of the multiverse being as diverse as can be. Gangs of number-worshipping accountants vie against fallen angels, sword masters, and dragons that look more like space aliens than any traditional fantasy fare; the streets teem with the seemingly absurd, but, in comparison to our own world, are any of theirs any more absurd?
Allison finds herself surrounded by angels, devils, monsters, and gods, not all of whom are friendly to her.

In the process she learns more about herself than she ever thought she would; not only is she more powerful than she thought, but she’s forgotten some of who she really is on her way to adulthood.

KSBD enjoys the support of a massive fandom, and, in January of 2018, a full, tabletop Role Playing Game was released based in the KSBD universe, which will remain available to anyone who donates $10 or more to Abaddon’s Patreon (which actually comes with a number of other benefits in addition.)

Awful Hospital by Jonathan Wojcik is a strange blend of fantasy and horror that’s an absolute delight to read. Undeniably weird, Awful Hospital has been a cult favorite online for years since its inception in 2014. In addition to having a charmingly simple art style that manages to turn horrific concepts into almost-loveable cartoony characters, Awful Hospital uses its web-based medium to add in occasional interactive bits. One such interactive point is how reader comments often appear in the comic as disembodied voices that our main character is plagued with.

The main character, always referred to as “you,” is a sickly-green woman with severe amnesia who has awakened in an absolutely Awful Hospital. In this hospital, nothing is as it seems and everything is most certainly out of code; at least, the hospital codes we would be used to. Our character is promptly greeted by a strange, talking virus by the name of Doctor H.M. Phage, T.E., who introduces himself as the head of every department in the hospital and an expert on essentially every subject.

From there on, the story continues to bring readers terrifying, hilarious, and strange characters who are, at least physically, often nothing more than animated body parts. The adventures in Awful Hospital lovingly parody all manner of popular media, from comics to movies to video games. The game itself reads something like a text adventure, which is itself a loving nod to the amazing storylines present in many text-based games.

The Alchemist by Paulo Coehlo is a story of dreams, love, hardship, and finding one’s place in the world told through a fantastical alternate history of the world rich with magic, mysticism, and ancient wisdom. In 2010, the classic novel was brought into the graphic novel format by Derek Ruiz and Daniel Sampere. Coelho’s rich imagery was interpreted by Sampere to produce an emotionally gripping visual interpretation of the journey contained within The Alchemist.

The Alchemist is a story that urges us to pursue our personal legend – the story of our life – in the same way that the leading character, a shepherd boy by the name of Santiago, discovers and pursues his personal legend. Santiago’s journey takes him all across the world from Spain to Egypt and beyond, and Sampere’s beautiful, airy art breathes a new and different life into the journey.

Lumberjanes is a story about five best friends on summer break in the rural woods who encounter strange creatures, creepy mysteries, and epic adventures where they never thought they would – summer camp. Co-written by award-winning comic artist and cartoonist Noelle Stevenson and first-time comic writer Grace Ellis, Lumberjanes falls into the great legacy of contemporary fantasy stories like Buffy the Vampire Slayer, Angel, Charmed, and even X-files, featuring monster-of-the-week style adventures and a core team of characters lining up against them.

A story by women about women, Lumberjanes has been hailed as one of the greatest successes in recent memory of a comic starring an all-female cast. It was the second comic published by Boom! Box, a publisher which has, so far, focused on experimental, unique, and inventive comics that buck the norms of the comic industry.

The five core characters – Jo, April, Molly, Mal, and Ripley – couldn’t be more different in personality, yet it is their shared interests and camaraderie that brings them together to make a fantastic team of friends. Their summer camp, called “Miss Quinzella Thiskwin Penniquiqul Thistle Crumpet’s Camp for Hardcore Lady Types,” turns out to be the site of a number of mysterious occurrences. Of course, no quality “Lumberjane Scout” would leave mysteries unsolved, so the Lumberjanes seek out the secrets behind a number of strange events that happen at camp, biting into a mystery much larger than they’d predicted.

Written by fantasy veteran Neil Gaiman, The Sandman is one of the most critically-acclaimed graphic novel series of all time, being one of the only graphic novels to ever make it to the New York Times Best Seller list. Published by DC comics starting in 1989, iterations and spinoffs of the series are still being published (or republished) to this day. The Sandman is a staple of indie bookstores and chain bookstores alike, and it has been interpreted into digital format as well. Over the length of its run, it has featured a number of cameos from famous DC Comics characters, such as members of the Justice League.

The Sandman follows the many journeys of Dream, a long-imprisoned embodiment of the power of dreams who had previously ruled over a realm known as “The Dreaming.” Dream (more commonly referred to as Morpheus) is a troubled king struggling to break free of his deep-seated flaws, and his journeys take him across multiple planes of existence including the waking world, which is the world as we, the readers, know it (except, of course, for its ties to the other realms.)

The series evolves stylistically across the length of its run, moving away from horror and closer to epic fantasy in later issues. Neil Gaiman himself has discussed this extensively in interviews, exploring how his own approach to the series changed as he built the story, learned more about producing a long-term series, and improved his own writing.

Fans of horror and fantasy alike are have embraced The Sandman over the years, relishing its mature handling of issues in a style that was ahead of its time in the late 80s. With the core series now complete, beautiful anthology editions allow for an improved reading experience, magnifying the stellar art that accompanied the original print run. 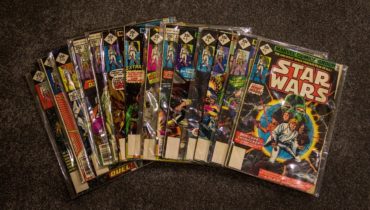 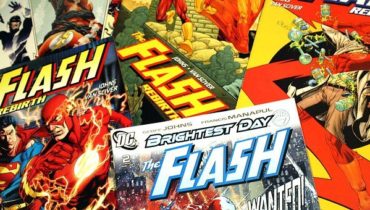